Musa Ogendo did not plead to the charge after the court deferred the plea to Monday next week.

• Musa Ogendo did not plead to the charge after the court deferred the plea to Monday next week.

• Sirangi told Magistrate Ondieki that he was assaulted by police when he was arrested and he did not have a lawyer. 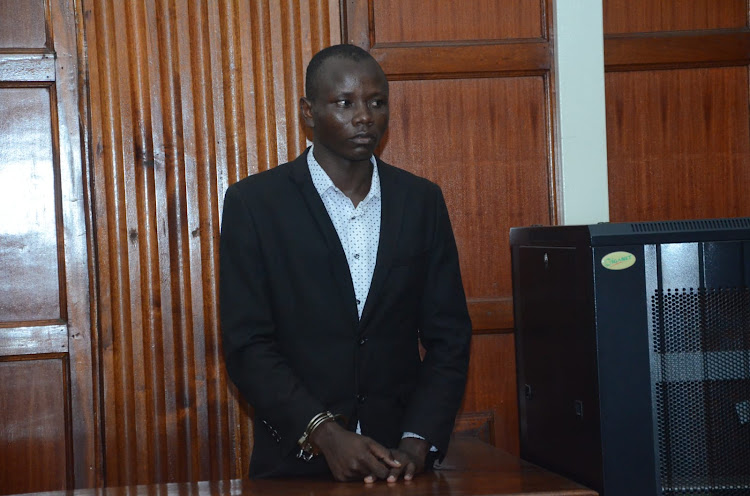 Musa Ogendo Sirangi before magistrate Robison Ondieki where he has been charged with stealing a laptop from IEBC worth 220,000 on August 19th 2022.
Image: DOUGLAS OKIDDY

Musa Ogendo Sirangi was on Friday 19th August arraigned before a Nairobi court to answer a charge of theft.

Ogendo allegedly stole a laptop worth Sh220,000 from IEBC on Wednesday this.

He however did not plead to the charge after the court deferred the plea to Monday next week.

This is after Sirangi told Magistrate Ondieki that he was assaulted by police when he was arrested and he did not have a lawyer.

In the charge sheet produced in court, it is alleged that on August 17 at the Anniversary Towers along the University Way in Nairobi, he stole one laptop make HP Probook valued at Sh226,240, the property of IEBC.

Sirangi will be detained at the Central Police station until Monday when he will be formally charged with the offence.

Else where Senior Counsel Ahmednasir Abdullahi has said the aim of the Azimio coalition is not for the Supreme Court to nullify the presidential elections but announce presidential candidate Raila Odinga as the winner.

In a social media post, the lawyer said that the coalition didn't want a re-run following their recent argument that there were votes that were not counted.

"Outgoing President Uhuru Kenyatta and Raila don't want the Supreme Court to nullify the presidential election of August 9," he said.

"They don't want a rerun. They want the Supreme Court to declare that Raila won the August 9 elections using fuzzy maths. Improbable? No! Impossible? No," he added.

The body of Musyoka Mbolu was identified by his sisters Mary Mwikali and Ann Mboya at Loitokitok sub-county mortuary.
Entertainment
5 months ago

Ledama was among a group of politicians allied to Azimio presidential candidate Raila Odinga who tried to prevent IEBC chairperson Wafula Chebukati ...
Politics
5 months ago

Roselyn Akombe is a former IEBC Commissioner.
Crime
5 months ago

'All those Facebook/Twitter accounts are fake ,' Juliana Cherera