"Both of us recorded statements with DCI Nairobi Area," Kuria said.

• Kuria said they received the information after they had come from a campaign in Murang'a in 2017.

• He, however, questioned why it has to be him who has to always answer questions on the same, despite him and Sabina recording statements with the Directorate of Criminal Investigations. 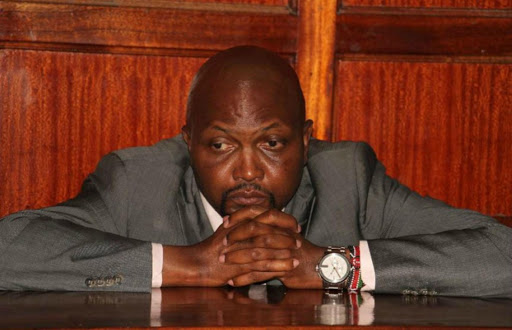 Moses Kuria, the MP for Gatundu South, now claims that Sabina Chege's acquaintances provided them with information on the whereabouts of the murdered IEBC IT expert Chris Msando.

Kuria claimed in a statement that they learned of the information after leaving a campaign in Murang'a in 2017.

However, despite the fact that he and Sabina had recorded testimonies with the Directorate of Criminal Investigations, he questioned why he continuously had to respond to inquiries on the same topics.

"The night we found Msando's vehicle at Roysambu was after we had come from Muranga campaigning for Uhuru Kenyatta with Sabina Chege. In fact, we were tipped off by her friends. Both of us recorded statements with DCI in Nairobi Area. How come no one ever asks her or Uhuru who killed him (Msando)?" he posed.

His response came after NTV aired an exclusive feature on how, five years later, investigations into the death of the ICT manager had reached a dead end.

Msando, who oversaw the electoral body's ICT unit, vanished, and his body was eventually discovered at the City Mortuary.

Hours after Msando went missing, Kuria was one of the first people to discover his car in Roysambu.

Four days later, Msando's body was discovered in Kikuyu alongside the remains of a young woman whose identity was eventually determined to be Carol Ngumbu.

He had barely been in the position for two months when his predecessor was fired for failing to work with the audit company hired to purge the voter list.

Msando was murdered just days before the general elections on August 8, 2017, which he expressed confidence would not be manipulated since the electronic voting system he had helped build could not be hacked,

The Gatundu South MP described Msando in a Facebook post before his body was discovered as "An idiot having a good time with a lady" when his car was discovered in Roysambu.

Since then, he has removed the tweet that sparked outrage from Kenyans, particularly the opposition led at the time by Raila Odinga.

Later, Kuria summoned a press conference and demanded that the opposition stop linking him to Msando's death.

Before traveling to Roysambu, they called the OCPD of the Kasarani police station to inform him that an automobile reported as missing had been located.

"We are only human, and what we have experienced is a daily accusation. I want this statement to end any further associations of myself with this subject since I am a parent and a leader "said Kuria.

Moses Kuria revealed that he will be among the pioneers to undergo the stem cell surgery in the world.
Politics
11 months ago

'You will know no peace,' MP Moses Kuria and Waruguru in ugly war of words

Waruguru accused Kuria of being insensitive towards women and their infants, saying that he was nursing a burn injury.
Politics
1 year ago

Moses Kuria gives an update on his health