• The two, identified as Albert Adamba and John Kilibwa, fought after Kilibwa demanded to be given more of the omena, a move Adamba objected to.

• Their elder brother, Vincent Misango, 56, intervened but Adamba hit him with a blunt object on the head and he fell unconscious. 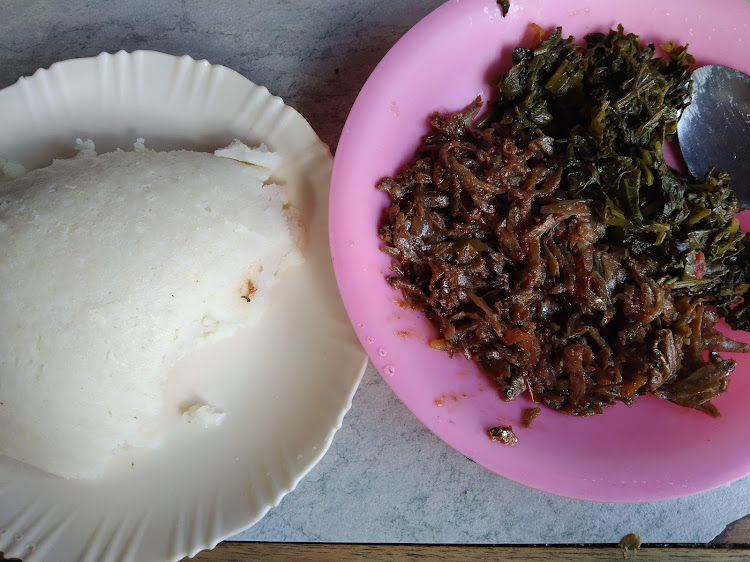 Omena and ugali on a plate
Image: The-Star

A fight between two brothers in Kakamega over a meal of ugali and omena resulted in the death of their elder brother in Likuyani sub-county on Sunday night.

The two brothers picked a quarrel over a meal of ugali and omena they had been served for supper by their mother at Kambi Elijah village in Seregeya sublocation, Likuyani, in Kakamega county

The two, identified as Albert Adamba and John Kilibwa, fought after Kilibwa demanded to be given more of the omena, a move Adamba objected to.

Their elder brother, Vincent Misango, 56, intervened but Adamba hit him with a blunt object on the head and he fell unconscious.

Misango was rushed to Turbo Subcounty Hospital where he was pronounced dead upon arrival.

Neighbours said the three brothers have had a long-standing land dispute.

“They have been disagreeing on how they should share a piece of land left behind by their late father,” village elder Jimmy Kwayumba said.

Seregeya assistant chief Moses Wanjala said the suspect had been arrested and is being held at Likuyani police station and investigations into the incident have been launched.

The body was taken to Kimbilio Funeral Home in Uasin Gishu county.

Meanwhile, the body of a 41-year-old man was discovered decomposing in his house after allegedly being killed by unknown people in Kilimani village, Seregeya sublocation, Likuyani sub-county.

The deceased’s uncle Reuben Mielizu said the assailants stole cash before escaping through the window.

“They strangled him using a tablecloth, which we found still wrapped around his neck. After the murder, they locked the door from inside and escaped through the window,” Mielizu said.

The administrator said the deceased still had some cash from the sale of the land, which is believed to be the target of his killers.

He said neighbours became suspicious after failing to see him for three days.

One of them went to check his house and found the door locked from inside. He pushed one of the windows open and discovered the body lying on the bed.

The body was removed and taken to Kimbilio mortuary in Uasin Gishu county.

Officers from the DCI department have launched investigations into the incident.

Men Fight Like They Are Demon Possessed Over Chicken (VIDEO)

The new EAC tax which took effect yesterday will cause an increase in food prices
Lifestyle
5 months ago
WATCH: For the latest videos on entertainment stories

Millers-Cheaper unga to be available this week