San Antonio, which is 250km (150 miles) from the US-Mexican border, is a major transit route for people smugglers.

• A fire official said 16 people including four children had also been taken to hospital.

• The survivors were "hot to the touch" and suffering from heat stroke and heat exhaustion. 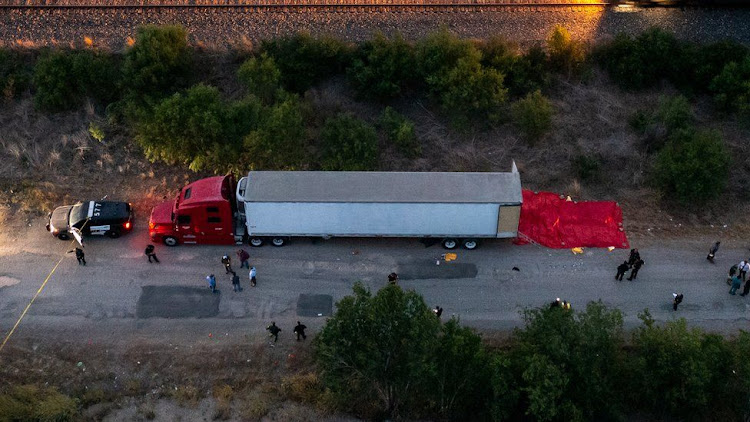 The abandoned lorry which had 46 bodies in it
Image: Getty Images

At least 46 people, believed to be migrants, have been found dead in an abandoned lorry on the outskirts of San Antonio, Texas.

A fire official said 16 people including four children had also been taken to hospital.

The survivors were "hot to the touch" and suffering from heat stroke and heat exhaustion.

San Antonio, which is 250km (150 miles) from the US-Mexican border, is a major transit route for people smugglers.

Human traffickers often use lorries to transport undocumented migrants after meeting them in remote areas once they have managed to cross into the United States.

"They had families...and were likely trying to find a better life," San Antonio Mayor Ron Nirenberg said. "It's nothing short of a horrific, human tragedy."

"We're not supposed to open up a truck and see stacks of bodies in there. None of us come to work imagining that," he said.

He added that the vehicle, which had been abandoned by its driver, had no working air conditioning and there was no drinking water inside it.

Mexico's Foreign Minister, Marcelo Ebrard, said that two Guatemalans were among those taken to hospital. The nationalities of the other victims was not immediately clear.

Three people are being held in custody and the investigation has been handed over to federal agents.

Texas's Republican Governor Greg Abbott blamed US President Joe Biden for the deaths, describing them as a "result of his deadly open border policies".

Beto O'Rourke, the Democratic candidate running against Mr Abbott, said the reports were devastating and called for urgent action to "dismantle human smuggling rings and replace them with expanded avenues for legal migration".

Immigration is a contentious political issue in the United States, where in May a record numbers of undocumented migrants were detained crossing into the country from Mexico - many traveling along extremely risky and unsafe routes.

Fleeing poverty and violence in Central America, many of the undocumented migrants end up paying huge sums of cash to people smugglers to get them across the US border.

San Antonio's climate is hot in the summer months with temperatures there reaching 39.4C (103F) on Monday.

New details emerge of missing Ethiopian businessman who was abducted

Missing Ethiopian businessman Samson Teklemichael has been in Kenya for close to 16 years.Teklemichael friends and business partners say he had
Lifestyle
8 months ago

PHOTOS: Life and times of the late Frank Obegi

Obegi's close family remember him as a happy-go-lucky guy with a sterling attitude to life
Lifestyle
1 month ago
WATCH: For the latest videos on entertainment stories