Ephantus Kiura, is alleged to have committed the inhuman act using a blunt object.

• The suspect had been imprisoned at Gathigiriri prison for barely two weeks by a Mwea law court for torching down his 76-year-old mother's house. 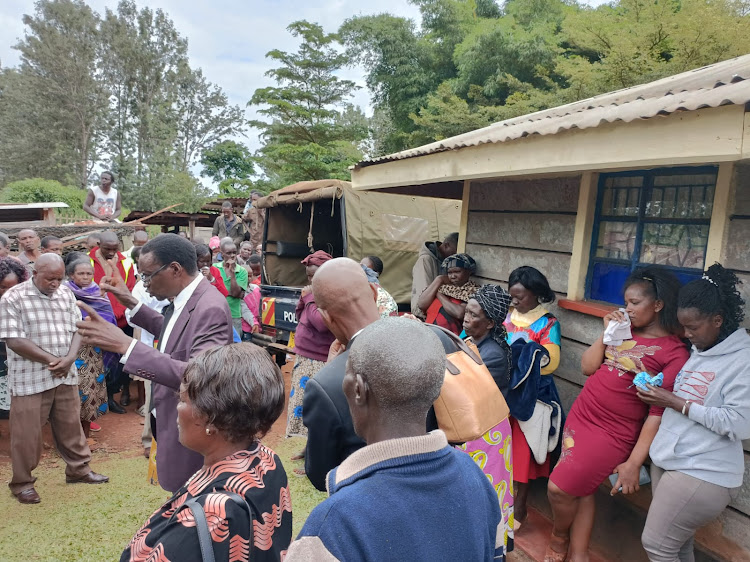 Curious neighbours gather at the late Grace Muthoni 's house as the police were taking the body.
Image: WANGECHI WANG'ONDU

Police in Kirinyaga are in pursuit of an ex-convict alleged to have killed his mother.

Ephantus Kiura is alleged to have committed the act using a blunt object and later fled the scene.

Mwea East police boss Daniel Kitavi told the Star on the phone that the body of Grace Muthoni Ndambiri was discovered on Sunday morning lying in a bathroom in her home in Riagicheru village.

The suspect, according to Kitavi, was among the over 3,908 inmates pardoned during the Madaraka Day celebrations by President Uhuru Kenyatta.

He had been imprisoned at the Gathigiriri prison for barely two weeks by a Mwea law court for torching his 76-year-old mother's house.

The police boss added that the motive behind the murder is still unknown but investigations have commenced.

"He went into hiding after allegedly committing the act. We have since launched a manhunt and are also appealing to those with information about his whereabouts to share it with us," the OCPD said.

The body was taken to Kibugi Funeral Home awaiting postmortem.

While pardoning the inmates during the Madaraka Day fete, President Kenyatta urged them to be changemakers in society, while also offering confidence in the criminal justice system.

“Reciprocate the generosity of your motherland through this act of mercy with a high sense of civic duty and service to your country,” he said in his speech.

Uhuru's acceptance to pardon the inmates was a response to petitioners in the justice and legal sector.

The President said the move was in line with the government's commitment to restorative justice and reintegration of offenders; on the recommendation of the Power of Mercy Advisory Committee.

Interior CS Fred Matiang’i said in April that there was a plan to release 5,000 inmates beginning in May.

Matiang'i said the move would run in tandem with the expansion of probation and after-service programmes targeting the reintegration of inmates.

The CS spoke during the launch of a training programme for newly recruited probation officers at the Kenya School of Government in Nairobi.

Matiang'i said prisons are struggling with congestion, which has been exacerbated by too many petty offenders.

The prison cleaner is estimated to be worth Ksh 257 million on Ksh 20,000 salary
Crime
7 months ago

Sources revealed that the officer in the rank of constable has been stressed for some time.
Crime
8 months ago
WATCH: For the latest videos on entertainment stories