Suspects include an Mpesa shop attendant where Sh240,000 illegally moved from the woman's account was withdrawn.

•The team believes the attackers were led by a former rogue police officer who is now on the run.

• One of the gunmen was armed with an AK47 rifle while another one had a pistol and others carried crude weapons. 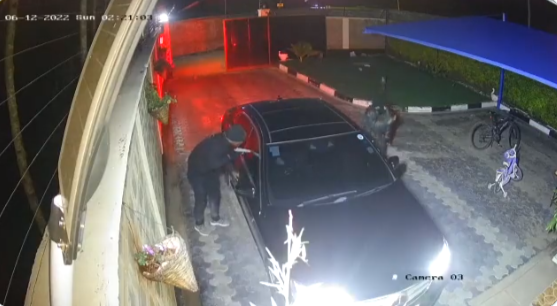 Police on Tuesday arrested two suspects linked to the attack on a female motorist in Gataka in Ongata Rongai.

The two were nabbed after they allegedly used the details of the victim whom they had robbed at her home on Sunday morning.

The two were arrested in Kasarani, almost 50 kilometres away from the scene of the crime after withdrawing Sh240,000 from a Mpesa shop.

The money had been illegally transferred from the woman's account on the night of the attack.

The armed robbers forced the victim to disclose her bank details facilitating the illegal transfer to a Mpesa agency in Mwiki.

Police handling the case said those in custody include the agent of the Mpesa shop and the man who went to withdraw the cash after he was instructed by one of the attackers who were at the scene of the attack.

A team of detectives from the Special Service Unit is pursuing the gunmen behind the dramatic attack on Sunday at 2 am which was captured on CCTV and widely shared on social media.

The team believes the attackers were led by a former rogue police officer who is now on the run.

One of the gunmen was armed with an AK47 rifle while another one had a pistol and others carried crude weapons.

The gang was captured on CCTV as they attacked the woman soon after she drove into her compound at Gataka, Ongata Rongai.

The woman was roughed up during the incident and money and electronic equipment were stolen from her house by the six robbers.

Some of the attackers wore balaclavas to hide their identity as they tormented the family for several minutes before escaping.

Detectives handling the case say they have profiled at least five suspects.

One of the attackers used a panga to break the car’s window after the driver who was terrified refused to open it and later pulled her out.

They then dragged the woman into her house where they ransacked it and forced her to divulge her bank details.

Interior Cabinet Secretary Fred Matiang'i visited the area accompanied by the Inspector General of Police Hillary Mutyambai and the head of Special Services Unit (SSU) Pius Gitari and assured the locals that necessary action will be taken.

The area is rapidly developing with many people settling there. Matiang´i directed the construction of the Kandisi police post to enhance security in the area.

It emerged that local authorities have been lax on following up reported incidents of insecurity.

The CS directed that all criminal activities reported in Occurrence Books (OB) to be compiled and forwarded to his office for action.

He told the administrators to ensure entertainment joints and restaurants do not operate in between Kandisi and Rimpa stage as it's a purely residential area.

Teams of detectives have visited the area and interrogated several people as part of efforts to get the gang behind Sunday´s attack.

What a terrible miscalculation from the thug who seconds later was fighting to regain control of the firearm from Irungu, as the prey turned out to ...
Crime
3 weeks ago

The officers cornered the pastor at around 8 pm, shot him twice before directing multiple rounds of ammunition to the car windscreen, the bonnet, and ...
Crime
3 months ago

A heavy exchange of gunfire ensued as the robbers, whose number remains unknown, escaped towards Chwele market and later to Uganda.
Crime
3 months ago
WATCH: For the latest videos on entertainment stories