• Wangechi's family was in court and their grief was immense. Her mother broke down and cried. 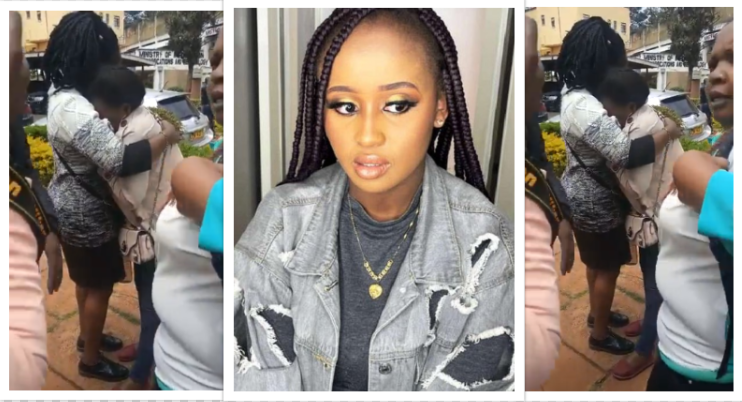 Grief: Purity Wangechi's mother breaks down at the Kiambu courts where her killers were arraigned
Image: TWITTER

Journalism student Purity Wangechi lost her life after trusting that her ex-boyfriend VDJ Flex would be mature enough to let her collect her belongings after the breakup.

The Kenya Institute of Mass Communication student had broken up with her DJ boyfriend after she found out that he was a thug in a gang that terrorises people in Kiambu.

Detectives said in a statement, "Wangechi had fallen in love with the killer and they had been in a relationship for some time before she discovered that he was a thug.

She confronted him about it leading to a misunderstanding between the two. She however didn’t know that her lover was determined to cover his tracks by eliminating her."

When she met with VDJ Flex to pick up her clothes, the DCI detectives said, he turned on her and killed her.

Wangechi was found with multiple stab wounds and her body was later dumped along the road close to Mburiria estate, in Kiambu county.

One of Wangechi's classmates tweeted, "All she wanted was her clothes, she didn’t deserve the brutality. No human being has the pain tolerance, purity was in so much pain dying."

Today, John Wanyoike Kibungi, 24, together with Kanaiya Kamau and Brendan Muchiri, who allegedly assisted him in killing the 19-year-old college student and disposing of her body were arraigned in court.

The prosecution was given 14 days to carry out investigations. The case shall be mentioned on May 30, 2022.

"Not easy seeing a mother wish for the world to cave in, in total darkness, premium pain. Her daughter is somewhere in the cold, lifeless. She had hopes of her sticking around for a long time #justiceforwangechi."

Another added, "May every sob this woman makes, be equivalent to 100 years of these ruthless men behind bars!!! #justiceforwangechi"

Watch the video clip below.

May every sob this woman make, be equivalent to 100 years of these ruthless men behind bars!!! #justiceforwangechi pic.twitter.com/aoI17geZkn

VDJ Flex Mfalme has distanced himself from the gruesome murder of Purity Wangechi adding that he just has an almost similar name to the suspect.
Exclusives
1 month ago

KIMC student Purity Wangeci met with VDJ Flex to try and rekindle the dying embers of their once blossoming love. She did not know that she was ...
Crime
1 month ago
WATCH: For the latest videos on entertainment stories