• Kenyans are calling on the DCI and National Police Service to act and bring the perpetrators to book.

A disturbing video of a lady being harassed by unidentified persons has sparked uproar on social media.

The viral video is said to have been taken after the lady was involved in a road accident involving a Boda Boda rider along Forest Road, Nairobi.

In the video, the lady was seen sitting in her car when a group of rowdy men stormed inside and began undressing and touching her inappropriately.

The lady was screaming for help as the crowd continued with their misbehaviour.

The video has sparked outrage on social media, with netizens calling on the DCI and National Police Service to act and bring the perpetrators to book.

The protective and safety association of Kenya has released a statement condemning the act.

"Apart from going against our societal and cultural norms, the incident has become a cause for alarm among the general public due to the lack of security within the country when it comes to disorderly and retaliatory behaviour of Boda Boda operators," the statement read in part. 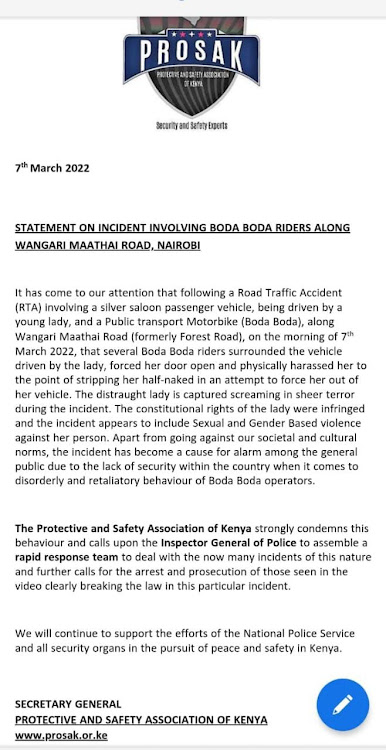 @ Laura Walubengo - "The video of the lady being harassed on Forest Road due to the boda accident. How did we get this low? If we so readily oppress one another... are we so badly scarred that we've such little respect for each other? Boda riders need to be kept in check. Uber style accountability."

@ Boniface Mwangi - "Boda bodas are the biggest threat to national security, worse than terrorism. Their everyday recklessness on the road causes accidents that leads to loss of limbs and lives. Some of them are in gangs that rob, maim and even kill. They need to be regulated before it’s too late."

@ Mwalimu Dida - "That Forest Road video is a perfect example why tight regulations should be placed on Boda Boda industry. Majority of riders are criminals. Govt should geotag all motorbikes, only sell them to licensed riders and forced them into SACCOs. We are facilitating criminals."

@ Kim - "Boda bodas should be removed from our roads and returned in an orderly fashion. Michuki style. Impact on livelihoods would be massive given how slow we are with everything but long term considerations should take priority. The industry cannot be allowed to continue as is."