The body had a message written on it from people suspected to be the killers reading; "Bwana ya mtu ni sumu". Police are investigating the cold blood murder of a woman whose body was Monday evening found stuffed in a suit case and dumped outside the General Service Unit Recce squad base in Ruiru.

A team of detectives from DCI headquarters have joined their Ruiru counterparts in efforts to establish the motive and killers.

They visited the scene where the body was discovered and concluded it was delivered there Monday morning.

The team later visited the mortuary where the body is preserved and picked the deceased's fingerprints for analysis to enable them identify her.

"We don't know who she is, we are working to establish,"an officer in the team said.

Police said the woman was hacked to death.

The body of the woman believed to be in her early 20s, had been chopped and stashed in a suitcase with her hands tied from behind.

The body had a message written on it from people suspected to be the killers reading; "Bwana ya mtu ni sumu".

The message was on her chest, palms and thighs. The motive of the murder is yet to be known, police said.

Police handling the matter said the writings on the body could be having a message or out to mislead investigations.

The killers used a marker pen to write on the body before wrapping it in a nylon bag and then stashed it in the suitcase.

According to police and witnesses, the legs were tied with a rope while the hands were tied at the back.

Her left breasts had been cut off while her neck had a nylon rope around it.

Police who attended the scene said she had no identification documents.

They said the woman might have been killed elsewhere and dumped alongside the perimeter wall of the highly guarded GSU Recce squad station. 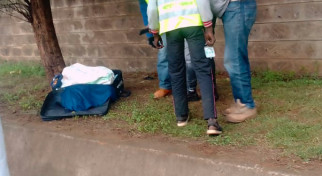 The crime scene where the body of a woman was found dumped in a suicase.

According to residents, the body was discovered at around 5.30pm Monday by pedestrians who notified the police.

The body was moved to City Mortuary as investigations continue.

Juja police boss Dorothy Migarusha said they had not established the motive of the murder.

“The victim seems to have been killed elsewhere and the body dumped at the scene. Detectives are investigating it,” she said.

She added no family had come forward to claim their relative was missing.

"We are in the process of identifying the body. We want anyone who has a missing friend or kin to come and report to enhance the investigations," she said.

Such incidents are common in the region with some being linked to love triangle and others to property. Residents said bodies are usually found abandoned at the scene near the Recce facility and later picked up by police.

Police said they have solved some of the cases while others are still pending.

This comes in the wake of increased cases of discovery of bodies across the country in killings that have remained puzzling and unresolved.

Some of the victims had been linked to drug trafficking, terrorism and other common crimes. Police have denied involvement in the killings.

For instance, there is an ongoing public debate over claims of up to 19 bodies have been retrieved from River Yala in Siaya county in a span of three months.

A section of Kenyans took to social media to raise concern over the reports, as they asked Inspector General of Police Hillary Mutyambai to open investigations into the matter.

The report on River Yala was first aired by human rights activists who visited the site where the bodies are said to have been found.

On October 20, 2021, Yala Mortuary buried nine unidentified bodies to create space in the morgue. Officials said the hospital had been receiving bodies from the river.

Gem subcounty police commander Charles Chacha said they had begun their investigations after Yala residents raised concern over the bodies.

Last week, a body of a suspected drug trafficker who had gone missing was found in a mortuary in Thika.

The body of missing suspected Mombasa drug baron Masuo Bakari Tajiri was found at a mortuary in Thika, Kiambu county.

The body, which was badly decomposed, had marks of torture and burns.

Tajiri went missing on December 5 alongside two others people who had accompanied him to Thika to purchase a matatu.

The two—Mohammed Hussein and Fahmi Bakari—are still missing with the families hoping for their safe return.

Mbusii recounts terrible experience after being accused of being a 'Mungiki'

Radio Jambo drive show host, Daniel Mwangi, famously known as Mbusii, says that 15 years ago he was accused of being a member of Mungiki.
Exclusives
4 months ago

'They have not eaten!' Eric Omondi protests the house arrest of Jimi Wanjigi