In whose hands are we safe? Video of GSU officers issuing threats sparks uproar

• The officers who were speaking in Sheng notifying civilians that they are ready to handle them. 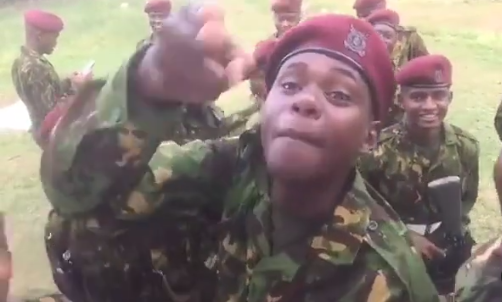 A video of youthful GSU recruits celebrating their graduation has been a topic of discussion on social media platforms in Kenya.

In the video, the officers who were speaking in sheng notifying civilians that they are ready to handle them.

Their actions sparked uproar from the public who felt threatened,  with the National Police Service describing it as “irresponsible and reckless.”

“Attention of the National Police Service is drawn to a video clip circulating on social media depicting newly graduated General Service Unit (GSCU) officers recording themselves as they make some irresponsible and reckless remarks,” read part of the statement from NPS.

“We wish to clarify and assure the public that the behavior portrayed in the clip is not acceptable and does not reflect the values of the GSU, Kenya Police Service and the National Police Service."

Here are some reactions from netizens on the viral video.

@ Sircharles - "In whose hand's are we safe surely?"

@ Kennedy - "Results of recruiting hooligans in the police force through corrupt and wicked ways we are not safe."

@ Katemuloks - "These are the kinds that go shooting pple with no reason."

@ Martin - "I guess they are half baked otherwise they would know what is expected of them. GSU is a disciplined force not a force of hooligans."

@ Mwango - "They are happy that they have achieved their dream. Just correct them and advice. They are very young. They do not deserve to loose their jobs vayee."

@ Muturi - "How were they recruited at the first place? Hawa ni wale huitiwa barua wakiwa wamelala home. The attitude is inexcusable considering the duty ahead."

Speaking to Mungai Eve, Nimo said she was given a short notice for that invite.
Entertainment
8 months ago