This week, Boniface Mwangi responded to the demand letter that Machakos governor Alfred Mutua had issued on October 20th, 2021.

Through his lawyers, Gachui Kariuki and Associates Advocates, the social activist buckled down on his earlier claims against Mr. Mutua in his statement of defense and sworn affidavit.

Mr. Mwangi said that the issue that had put him on edge was the destruction of his still-under-construction home that is located in Machakos.

Mr. Mwangi added that prior to the bombing of his home, he had come out publicly in support of former First Lady of Machakos, Lillian Ng'ang'a, and her new relationship with Juliani.

Mr. Mwangi explained that Juliani and Lillian had been receiving threats from Mr. Mutua as a result of the relationship.

Mr. Mwangi avered that his comments about Mr. Mutua were in "Whole and in context devoid of any malice and were not defamatory and/or libelous and were matters of fact, opinions and fair comment on matters of public interest and in the exercise of the defendants fundamental right of expression.

The statement of defense added that any other comments that Mr. Mutua had complained about were also matters of fact, opinion, and fair comment based on matters that were in the public domain.

Mr. Mwangi then proceeded to include newspaper headlines that had reported on Mr. Mutua's ex-wife, Josephine Thitu, complaining about the behaviour of the politician.

Mr. Mwangi also added newspaper headlines where Mutua's ex-partner, Lillian Ng'ang'a, was seen alleging that her life was under threat from him. 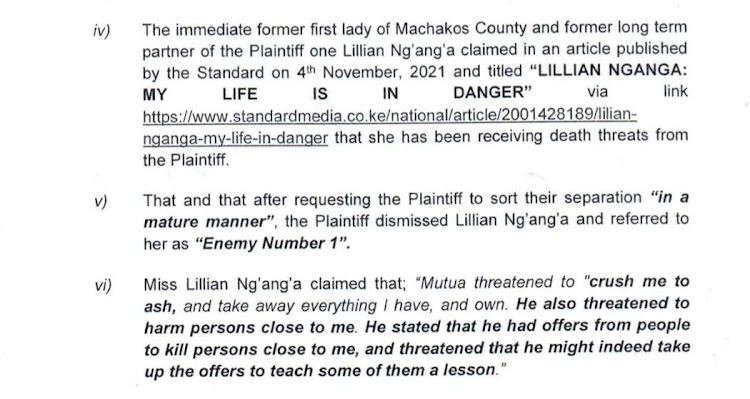 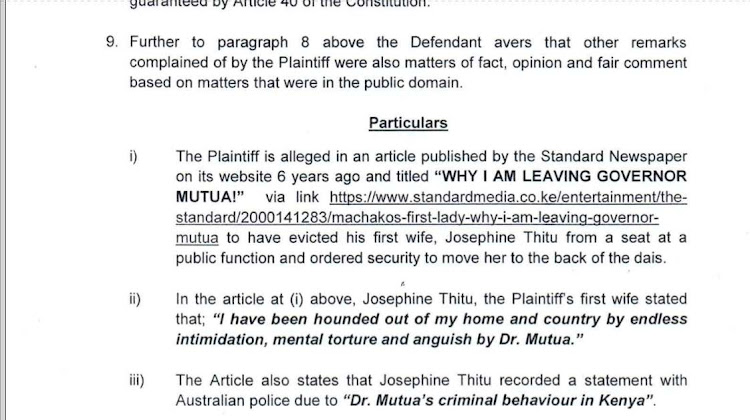 Additionally, Mr. Mwangi complained that the Machakos Governor had been indifferent to his sufferings after his house was destroyed despite the house being in his county.

Mr. Mwangi maintained that the governor's reputation hadn't been affected counter to the claims made in the demand letter.

The social activist said that proof of this was that the politician's functions had gone on unhindered and that he hadn't been shunned even after Mr. Mwangi's allegations.

Mr. Mwangi concluded that the suit issued by Mr. Mutua was spurious with the intention of scuttling and stifling investigation into the bombing of his house.

Mr. Mwangi then asked the court to dismiss Mr. Mutua's suit with cost.