Two explosions have been reported in Kampala, Uganda a week after Kenya heightened its vigilance.

According to local media houses in Uganda, an explosion has gone off at Raja Chambers, along Parliamentary Avenue in Kampala.

Another bomb explosion was reported at the entrance of the Central Police Station.

Witnesses said office buildings shook when the blasts went off.

Reports indicate that some people have been injured but no deaths have been recorded yet.

According to the pictures shared on social media, cars were filmed burning after the explosion.

Police have already cordoned off the affected area as investigations into the incident continue.

According to Daily Monitor, Security team are currently ordering evacuation of everyone at Parliament.

Officers can also be seen using sniffer dogs to search for more evidence and explosions around Parliamentary Avenue. 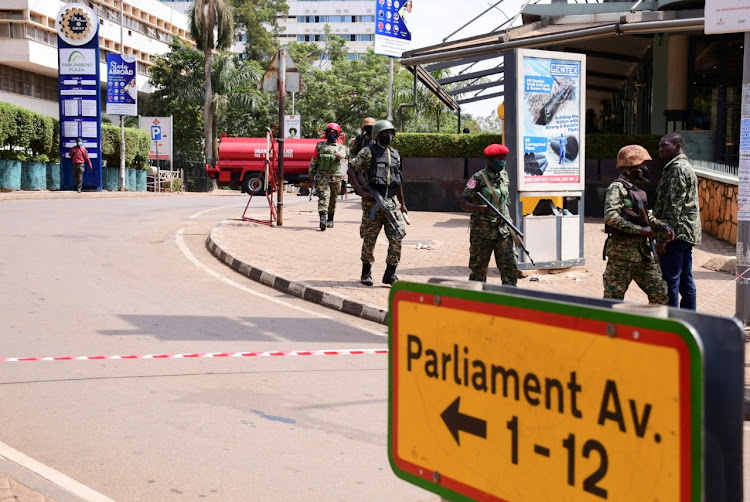 Forensic investigators have also arrived at Parliamentary avenue as security operatives continue to comb the scene for any pieces of evidence into the explosion.

President Uhuru Kenyatta was expected in Kampala to discuss the ongoing conflict in Ethiopia.

Uhuru will be going for the meeting after receiving an invite from Uganda's President Yoweri Museveni.

Museveni called an East African bloc leaders' meeting to be held on November 16 to discuss the conflict in Ethiopia.

The move to restore calm in Ethiopia gained momentum on Thursday as US Special Envoy for the Horn of Africa Ambassador Jeffrey Feltman landed in the country.

It is not clear whether this meeting is still going to take place as scheduled.

One killed a waitress at a bar and the other killed a suicide bomber who had smuggled the explosives onto a bus.