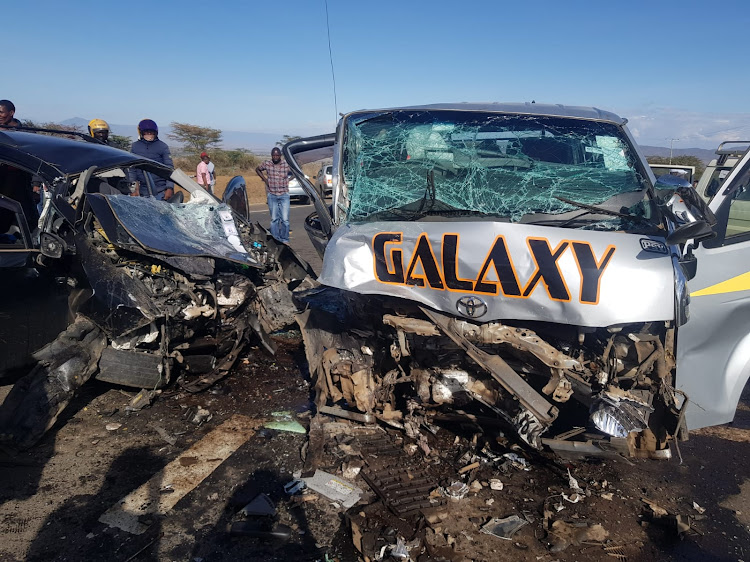 Mangled wreckages of the vehicles that we involved in a grisly accident at Maltaro area along the Narok- Maai Mahiu highway.
Image: ANN SALATON

Four people among them the driver of a Toyota Wish died on the spot after they were involved in a grisly road accident at Maltauro area along Narok-Maimahiu road Sunday.

"It happened that the driver of the Wish (deceased) who was driving from Narok towards Mai Mahiu, upon reaching the location of the accident overtook carelessly without due care thereby colliding head-on with the matatu which was driven from the opposite direction," Kizito explained.

As a result of the accident, the police boss said, the driver of the Toyota Wish died on the spot with two of his passengers and a female adult passenger in the matatu vehicle.

The injured, he said, were rushed to Narok County Referral Hospital for treatment while the four bodies are lying at the same facility's mortuary.

"The scene was visited and processed and the wreckage of the motor vehicles pending towing to the station for inspection,“ said Kizito.

According to eyewitnesses, the Toyota Wish driver was trying to avoid a drunk man who was crossing the road when he was involved in the accident.

The board is likely to make recommendations including the closure of the school as police and fire experts investigate the incident that broke out ...
Crime
7 months ago