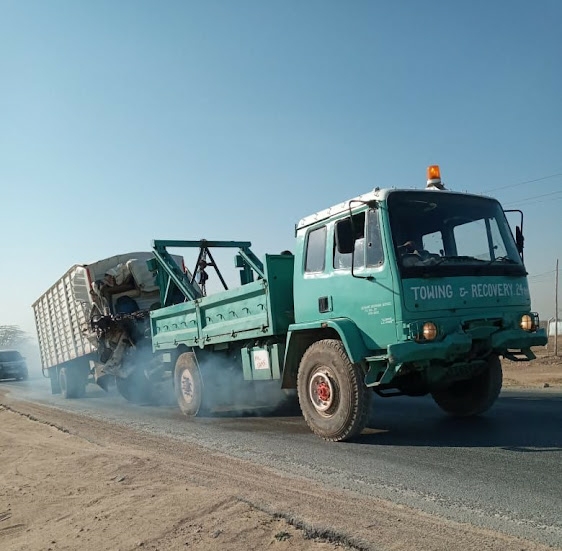 Remains of the lorry that was involved in the Monday accident being towed to the Athi River police station.
Image: Janet Shitote/Rachael Kilonzo

Two people lost their lives while two others sustained injuries following a grisly road accident that involved a lorry and a trailer along Mombasa Road Monday morning.

Njagi said that the departed died on the spot and blamed the lorry driver for reckless driving.

“The lorry driver and his turn boy died on the spot. He did not follow the traffic rules for diversion,” Njagi noted.

He said that the two vehicles were involved in a head-on collision as the lorry was on its way to Mombasa from Nairobi while the trailer was headed in the opposite direction.

“Drivers should stop to rest when they feel tired instead of pushing on and eventually causing accidents,” he said

He further called on all lorry drivers to be very keen while driving along Mombasa Road since it is under construction and may have diversions that at times cause confusion leading to accidents. He cautioned all motorists against defying traffic rules.

The injured passengers, one of them the trailer’s driver whose leg was broken, were rushed to Athi River’s Shalom Hospital.

“Those passengers that got injured together with the trailer’s driver were taken to Shalom Community Hospital in Athi River Sub-County,” said Njagi.

The vehicles were towed to the Athi River police station pending inspection as police began investigations into the accident.

This comes barely a month after a female traffic police officer who had gone to rescue accident victims was run over by a vehicle losing her life on the spot.

The cop who was controlling evening traffic at Kariokor roundabout was punched in the face by a man who immediately took off after the incident, ...
Crime
2 weeks ago