'You got the wrong person!' Transgender activist lectures cops 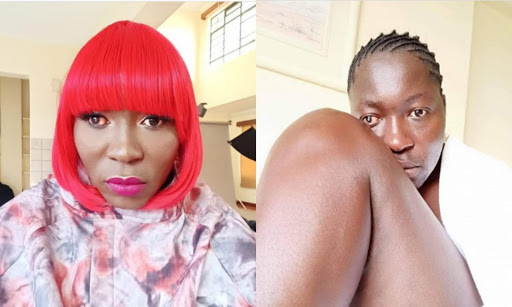 Transgender activist Letoya Johnson lectured two men who identified themselves as policemen and went ahead to pull her wig off and throw it to the dirty pavement.

And angry Letoya streamed the altercation live on her Instagram while lecturing them for their bad behaviour.

"Why did you pull my hair? I'm I being looked for, for murder? Who are you?"

Letoya went ahead to tell them to arrest her if she has done anything wrong.

She added, "Your job is utumishi kwa wote (Service to all). You got the wrong person this time round...Nonsense."

Check out the entire altercation below.

Letoya explained how the altercation occurred in a long post on her social media.

She wrote, "Violence is something that I am against. These two police officers got out of their car from nowhere and started harassing me yesterday after I came from a private viewing of the invites only space. I was just dropped by friend near the lights at Prestige plaza.

This vehicle came from nowhere and made a turn as if they are getting into the nearby gate. So I passed quickly and continued with my going to pick a taxi from prestige plaza.

However, before I could walk a few steps, they started following me and claimed that they are police officers."

She noted, "The second thing, one of them pulled my hair asking if i am a man or a woman? Well, first i asked them why they were harassing me. When we could not have informed conversation to find out if they made wrong person to arrest, they kept harassing me.

I asked them the following;

1. Show me your budge numbers.

2. Tell me which station you are located.

3. Tell me or show me the arrest warrant.

Note : they were in civilian clothes."

She continued, "Do you know that these people did not arrest me, take me to the police station or show me any documentation or budge number that was clear!

Only one of them showed me something and it was not clear. That was when I went ballistic. This kind of Transphobia and discrimination must end. They could have killed me or stolen from me.

I am happy I got the courage to stop them by knowing my rights. I will make sure I record a statement at Kilimani tomorrow. Empowerment is important and police need to know that their job is to protect every Kenyan Not use their authority to harm us. That's not leadership.! It is an abuse of power!"

She reported the matter to the police station. Check out the OB number.

I was forced to strip at airport to prove my identity

She said that when her passport had an "M" for male on it, there were a number of times she had to prove her identity by stripping.
Lifestyle
3 months ago