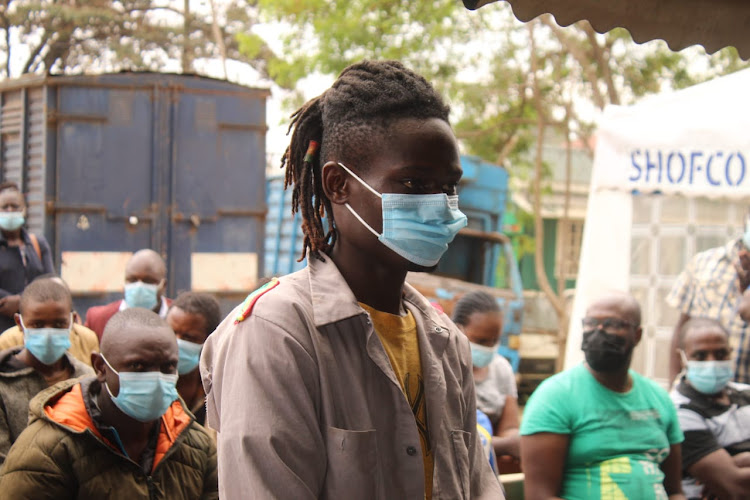 A man who has been threatening to kill his father for quite some time despite the intervention of family members and friends has been charged in a court of law.

Benard Nono in the particulars is said to have committed the offence contrary to section 223 sub-section 1 of the penal code on October 6, at Mashimoni area within Kibera in Nairobi county by chasing his father Livingstone Olumi within the estate while armed with a panga.

That day Olumi was at his house at about 1:30 pm when his son Nono who has not been on good terms with him arrived he was armed with a panga and without warning, he cut his father on the leg, the police report says.

An elderly Olumi ran for his dear life but Nono whose intentions were to kill his father followed him while still having the panga at his hand. Fortunately, Olumi managed to escape and went into hiding.

Olumi is said to have tried to settle the matter with his son with the help of some friends bore no fruits.

The undeterred accused continued to unleash death threats on his father.

However, Olumi sought help from the members of the public since the matter was getting out of hand.

The public helped him in restraining his son escorted him to the Golf Course police station where he was booked in and taken in for questioning before being presented in court for the alleged threats.

Court prosecutor Kinuthia Njenga did not object to his release on bond but called for a tough bond terms since the offence was serious.

Nono denied claims saying he did not do it before the principal magistrate Monica Maroro who released him on a cash bail of Sh, 100,000.

The matter shall be mentioned on 26.

In the encounter staged at Njoki’s house, the suspect behind the killing suffered powerful punches from the deceased, who is rumoured to have been an ...
Crime
3 months ago