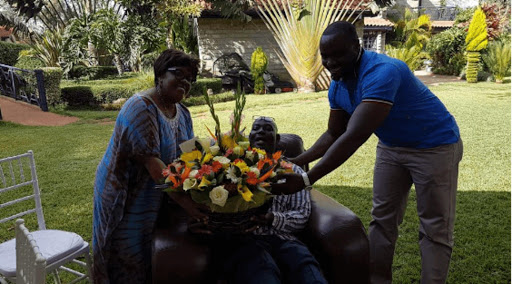 Ranalo Foods restaurant owner William Osewe has narrated the events that led to his shooting in 2016.

According to Osewe, Tom Mboya shot him at a location along Thika road.

He told the Nation that Mboya pulled a gun and threatened to shoot him. Osewe did not take the threat seriously until Mboya fired the first gunshot.

"He gave me the first shot on my chest, it broke my 3 ribs, I stood abit but fell down. After falling down, I struggled to come up, he shot my hand again.

When I was lying down, he shot me again on my back which hit my lower spine. I heard another shot, fortunately, it did not hit me," he recalled.

The fourth bullet, Osewe said, hit a man that was guarding a nearby building.

Immediately after the shooting, Mboya went to the police, reported that he had killed somebody.

The businessman says that the shooting changed his life, leaving him dependant on people and paralyzed on the lower part of his body.

The shooting left him lying in bed for 3 years. It ruined his pelvic muscles, so he has to wear diapers.

"I was being taught how to sit like a baby... I would fall down, even up to now I don't have balance. Lying in bed for 3 years," he said.

Osewe denied reports that Mboya was his close friend, saying that he would hire him as a driver severally.

“I have considered the probation report tabled before me and noted that the accused Tom Mboya never showed any remorse for his offence,” the ...
Crime
3 months ago