City man attacks his wife, mother in law and neighbor

Piece by: KNA by Gathoni Nyambura 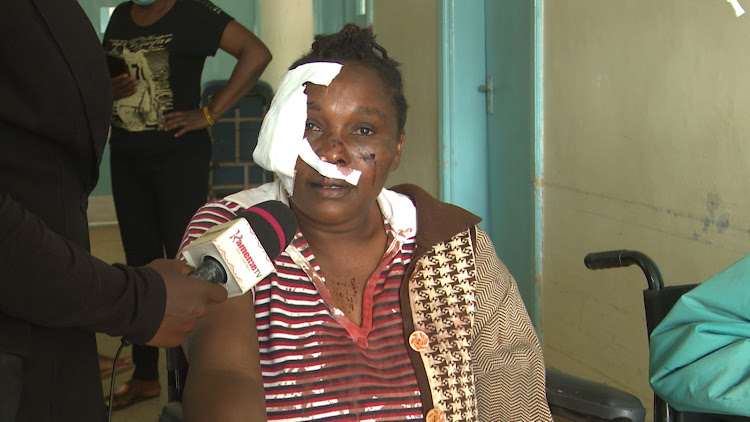 Susan Wairimu who was stabed by her husband
Image: GATHONI NYAMBURA

Two women and a man are nursing knife wounds at the Nyahururu County Referral Hospital after they were attacked by an enraged man in Maili Saba area, Laikipia County.

Christopher Mwaura was arrested after he attacked his mother-in-law, his estranged wife, and their neighbor in Maili Saba village in Marmanet division, when the three tried to stop him from accessing his children.

Mwaura is said to have travelled from Nairobi in a bid to take away his children from his estranged wife who has been staying with them since they separated in August this year.

The mother-in-law engaged him in a discussion that soon degenerated into a serious disagreement.

It is at that juncture the man pulled a knife and attacked his mother-in-law, and tried to stab her. Sensing danger, the wife rushed to save her mother and was also viciously attacked.

“He entered our compound asking to be given his children, but I had decided not to give in to that. He tried negotiating with my mother but she stood firm with her decision. It is at that point that he pulled out a knife and started chasing me around the compound and started stabbing me,” said Susan Wairimu.

Paul Gichuki a neighbor who was doing some repairs in the homestead was also attacked when he intervened trying to save Wairimu.

“I saw the man sitting on his wife and unleashing blows on her. I didn’t know he had a knife, upon rescuing her the infuriated man turned the knife on me and stabbed me on my right rib,” said Gichuki.

The three were still at the casualty section of the Nyahururu County hospital by the time of going to the press.