• Pensions also shall be denied to any widow or widower who abandons any of a deceased KDF officer's children. 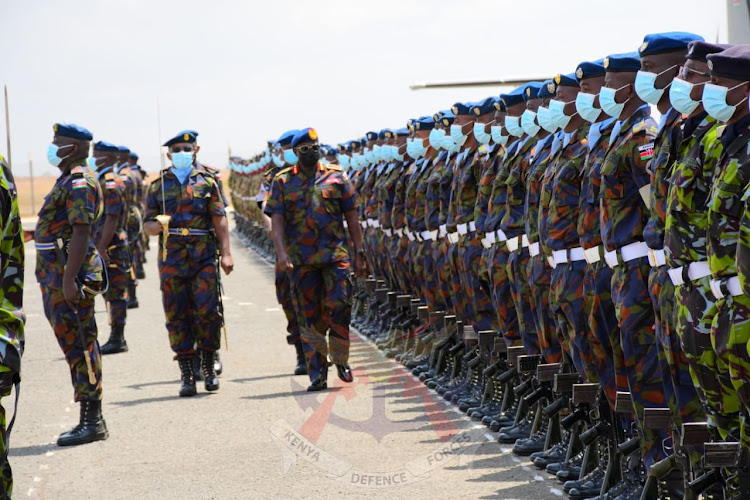 KDF widows and widowers who remarry or enter new relationships will not be paid pension benefits.

New rules published by the Defence ministry provide that no payment shall be made to a KDF widow or widower who remarries or cohabits with another person as husband or wife.

Pensions also shall be denied to any widow or widower who abandons any of a deceased KDF officer's children.

“The board shall cease payment of the pension from the date next following remarriage or cohabitation upon confirmation of the same,” KDF (Pensions and Gratuities) (Officers and Service Members) Regulations, 2021, reads.

When the widow or widower has children by the deceased KDF member under his or her charge, they may receive the pension on behalf of the children. It can also be sent to an approved guardian.

“The money is to be used in the maintenance and education of the child or children to the satisfaction of the [Pensions Assessment] Committee,” the rules state.

They were gazetted by Defence CS Monica Juma and PS Ibrahim Mohamed on September 17.

When an officer is survived by children only or when payment to a widow ceases, the children shall be paid double their portion.

“Pension for the child shall cease upon the marriage of the child,” the rules state, setting the cut-off age for marriage at 24 years.

If ratified by MPs, monies for children of deceased KDF personnel would be paid to the widow or widower strictly for maintenance and education of the child or children.

“Where there is no widower or widow, or if the widow abandons any child of the deceased, the KDF committee may pay the pension to an approved guardian,” the regulations read.

The new rules provide that no widow or widower shall be entitled to a pension award unless the marriage was recognised by any law.

A pension shall also be paid in respect of each child until he or she reaches age 24, providing the rate would not be more than a quarter of widow’s or widower’s award.

The Defence Ministry has, however, provided that pensions and gratuities be paid within 90 days of an officers’ death or retirement.

“Pension or gratuity shall be paid within 90 days from the date of retirement or from the date of the death of an officer or service member, except where such payment is delayed by court cases,” the rules read.

In March 2018, Parliament annulled KDF’s proposal for hastened pension and gratuity payments to officers and their families.

The Delegated Legislation committee said the proposed 90 days was a scheme by KDF to withdraw money from the Consolidated Fund through the backdoor.

At the same time, soldiers and service members who suffer disabilities in the line of work would be granted Sh20,000 monthly to cater for “expenses of assisted living” – to be reviewed every four years.

The payout would apply to any officer or service member who is deaf, blind, or physically disabled and uses a wheelchair.

Where an officer leaves no widow, children or dependents, KDF would award the gratuity to the surviving parents, brothers, and sisters.

In this case, the relatives will get an amount not exceeding the pension for six months, and gratuity as applicable, as would be awarded to a widow or widower.

A proposed Pensions Assessment Committee would have the discretion to determine the share for each of the kinsmen.

Those who don’t qualify would on retirement or discharge be paid a service gratuity at 0.0025 per cent of the annual pension for the period served.

Surviving parents, brothers, and sisters would be entitled to a gratuity not exceeding the deceased’s pay for one month.

For widows and widowers, the pension would be paid at not more than a third of the deceased’s rate of pay at death or retirement.

“If there is more than one widow, the pension shall be divided equally between them,” the new rules further read.

Officers who opt to retire early or are retired compulsorily, and have served for 10 years may be granted a gratuity.

Those dismissed for misconduct or whose services are terminated after serving 10 years may be granted not more than 90 per cent of the sum they could have received.

Officers who suffer disablement from wounds, injury or disease may if retired on such grounds before completing 10 years may be granted gratuity or pension.

Over the years, many ladies have used the avenue of social media to air their stories about s3xual abuse or harassment.The odd thing is that most of ...
Lifestyle
1 week ago