Piece by: KNA by Dickson Mwiti 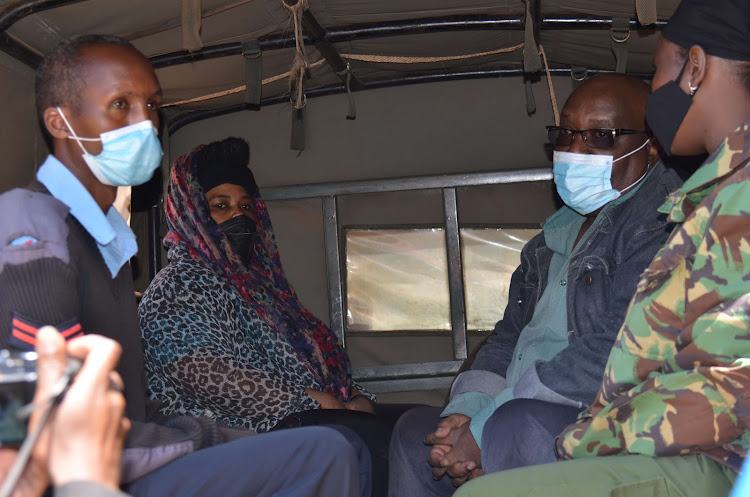 James Muthiora alias Kaliente (in spectacles) and his wife Fridah Karimi in a police vehicle after the two were sentenced to life imprisonment for trafficking bhang.
Image: DICKSON MWITI

A Meru court has sentenced a man and his wife to life imprisonment for trafficking bhang.

The two were arrested in November 2018 alongside three others who were acquitted.

The three were Timothy Kinoti, Josphat Ekeno, and Jacob Githae.

Mr Muthiora and his wife were sentenced to life imprisonment in the first count, where they were accused of jointly trafficking by storing, selling, and distributing 103 kilograms of narcotic drugs namely cannabis with a street value of Sh3.09million.

They were also sentenced to 5 years imprisonment or pay a fine of Sh4.6million for being in possession of utensils used in connection with the preparation of narcotic drugs contrary to section 5 (1) (d) of the narcotic drugs and psychotropic substances contrary to act no 4 of 1994.

The utensils included a weighing scale believed to be used in weighing Cannabis Sativa.

They were however acquitted of the count of being in a house in which persons resort for the purpose of using narcotic drugs contrary to section 5.

Their lawyer Mr. Kiogora Mugambi expressed dissatisfaction with the judgment arguing that there was no substantive evidence that the magistrate relied on giving his judgment.

“As the defence side, we will be moving to the High Court for further redress. We feel that the evidence presented to the court was not sufficient to warrant such a judgment,” said Mr. Mugambi, adding that it was their right as per the constitution to move to high court following dissatisfaction with the lower court’s decision over the matter.

He also termed the jail terms as harsh and excessive depending on the evidence that was presented before the court.

Sanaipei reveals why she wrote her 'Rasta Man' song

In a post on her Instagram, Tande said 'Rasta Man' is a message and not just a love song.
Entertainment
1 month ago