Piece by: KNA by Erick Kyalo 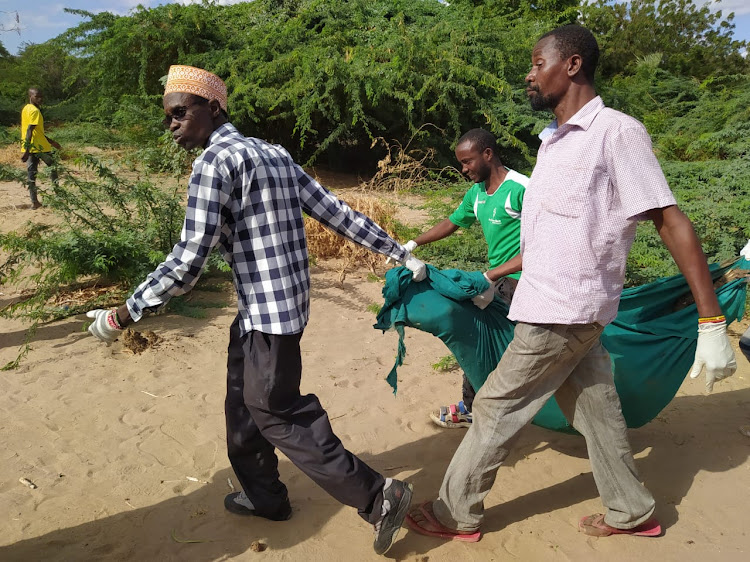 Youth in Mororo help police to carry the body of a man exhumed from a shallow grave along the banks of River Tana. The body was found by a boy grazing their goats in the bushes, he informed neighbours, who called in the police
Image: ERIC KYALO

Police in Madogo Ward, Tana River County has exhumed the body of a middle-aged man from a shallow grave in Mororo area on the banks of River Tana.

The body was found by a boy checking on their goats in the bushes, who informed the neighbours and called the police.

He also urged members of the public who may have lost loved ones to report the incident to the nearest police station so that investigations could begin.

Angry area residents have called on the government to clear the bushes along River Tana to improve security.

“We have insecurity problems in this village, especially along the river. This is not the first time we are seeing our people dumped into the river or buried in shallow graves. We urge the government to do thorough investigations and unmask the criminals killing our people," Sadam Abubakar said

Mororo peace chairman Juma Omar alleged that the criminals killing people may have changed tactics from dumping the victims into River Tana to burying them in shallow graves after the recent discoveries of bodies thrown into the rivers while attached to heavy objects.

At least 16 bodies have been recovered from River Tana in the last 3 months.

Police have found it difficult to begin investigations into the identities of the bodies because they had decomposed beyond recognition.

Celebrated football star Godfred Yeboah, popularly known as TV3, was laid to rest in a bizarre and eyebrow-raising ceremony over the weekend.
Lifestyle
3 weeks ago