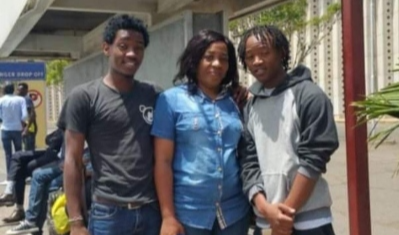 Lucy Wanjiru and her sons who were killed in Kitengela
Image: Facebook

A court in Kajiado has granted detectives 10 more days to detain the prime suspect behind the killing of four men in Kitengela, Kajiado County.

The suspect, 40-year-old Benson Melonyie ole Mungai, was arraigned in court Tuesday after he was nabbed in his hide-out in Kitengela town last evening by DCI officers.

Resident Magistrate Becky Cheloti allowed the officers to hold the suspect at the Kitengela Police Station until August 27 when he will be brought back to court for plea taking.

The DCI had requested more days to hold the suspect in order to question him and follow up on leads that would lead to the arrest of more suspects.

According to a statement from the DCI, Ole Mungai was positively linked to the brutal killings after forensic investigations placed him at the scene of the crime, where it was established that he led and coordinated the killing of the four.

The four men: two brothers Fredrick Muriithi and Victor Mwangi alongside their friends Mike Onduso and Nicholas Musa were killed by a mob on August 8 in Kitengela in a case of mistaken identity.

The four had left their Syokimau home on August 7 while riding on three motorbikes to attend a birthday party in Isinya town where they spent the night.

However, they were ambushed and attacked on Sunday night as they returned to Syokimau by villagers who accused them of being livestock thieves.

According to their relatives, the quadruple had stopped to repair one of their motorcycles when they were attacked 20km from Namanga Road.

A post-mortem examination at the Nairobi City Mortuary by chief government pathologist Johansen Oduor showed they suffered sharp object injuries that pierced into their heads.

Cops arrested for the murder of Kianjakoma brothers in court (Photos)

The outrage from the public due to the statements made at the funeral underscores the background upon which the six have been speedily apprehended.
Exclusives
4 weeks ago