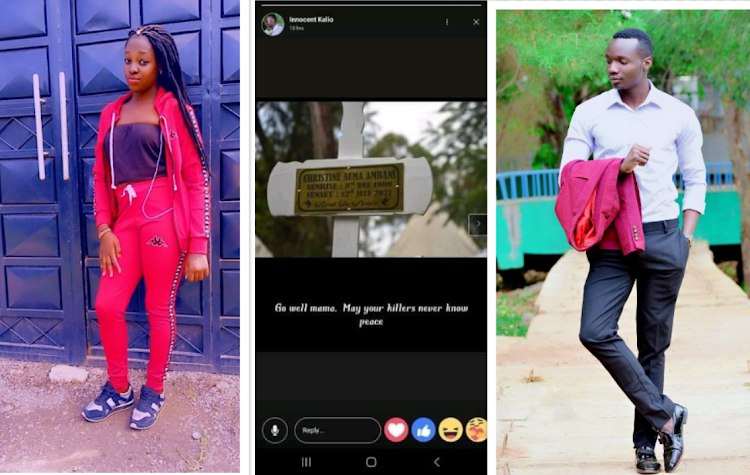 Innocent Kalio Makokha was arrested by DCI yesterday where he was hiding out in Kayole and is considered the prime suspect in the murder of Christine.

But his bizarre behaviour is raising eyebrows.

First, Makokha took to his social media and announced that someone has to die.

A month before Christine's murder, he took to his Facebook and wrote, "People really have good things to talk about you, but you have to die first!"

Four days after her brutal murder, he took to his socials to pay tribute to Christine, "This is more than worse to me. REST EASY MY CLOSE PERSON. They'll never have peace."

Then he posted a long post detailing his last moments with Christine before she was brutally stabbed in the neck.

Read all about it below.

DCI detectives unearthed his criminal past. Makhokha is the main suspect in a triple homicide involving his brother, his brother’s wife and their ...
Crime
1 month ago

Now, it turns out he posted photos of her funeral on his Facebook status. Makokha specifically shared the photo from the graveside of a cross with her details.

He captioned it, "Go well, mama. May your killers never know peace."

Christine was buried in Kakamega over the weekend. The question on everyone's mind is, did he attend the funeral?

Two days before his arrest, Makokha wrote, "Never be a prisoner of your past. It was just a lesson, not a life sentence."

This is after the DCI detectives unearthed his criminal records where he is linked to a triple homicide that involves his family.

He is expected in court today to face murder charges.

Who is Wycliffe Omwenga and why is his death causing a furore among the police, family and ongoing court case?
Exclusives
1 month ago