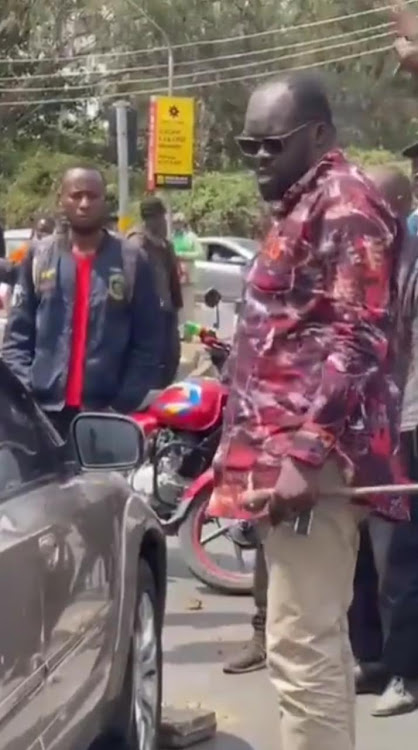 Robert Alai at the accident scene

Blogger Robert Alai was Friday arrested and detained at the Kilimani Police Station, Nairobi on allegations of beating musician Ringtone Apoko with a wooden club.

Police said they were talking to Alai for “clarification” on what led to the violence and road rage.

Alai did not respond to calls for clarification for what he had earlier on called a traffic offense.

Ogweno's sister, Eunice Ouru, told members of the fourth estate, “Let this not be the way to settle disputes among police officers in the country, it ...
Crime
2 months ago

He narrated the genesis of the entire drama road rage drama, Ringtone said, "We were on the roundabout on Oloitoktok Road, when the lights turned green, he did not move his car and people behind him were hooting. He removed his hands from the window and threw them.

I over took him and saw it is him, I took my hand out of the car and hit the side of the car and threw my hands at him. He followed me till Dennis Pritt Road where he rammed into my car and then got out with a rungu and hit me with it."

Ringtone added that he is currently in the hospital seeing a doctor because he has a splitting headache from the side of the head where he was hit.

During this road rage drama, a crowd gathered, they blocked the road and wanted to lynch Alai.

"They wanted to lynch him but I stopped them, they instead made a citizen's arrest. Alai is at Kilimani Police Station."

Jemutai reveals why she and Professor Hamo aren't legally married

'No we are not married nor have we done the koito proceedings'.-Jemutai
Entertainment
2 months ago