• One of Migori Governor Okoth Obado’s personal assistants lured slain Sharon Otieno and a witness under protection to a car. 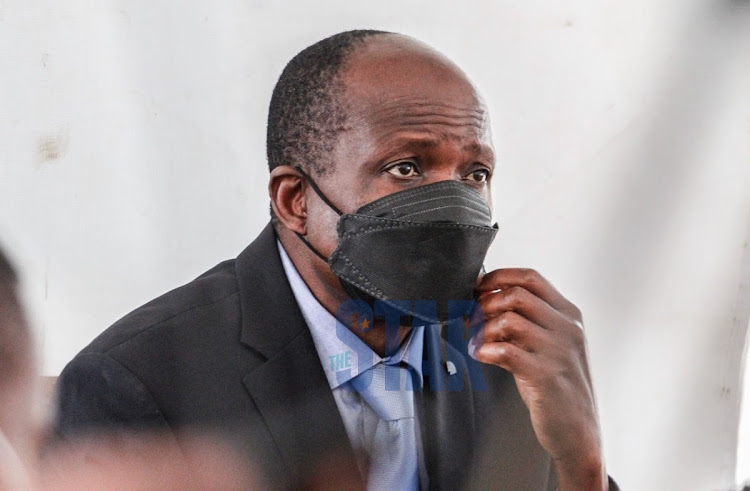 One of Migori Governor Okoth Obado’s personal assistants lured slain Sharon Otieno and a witness under protection to a car that was parked some 300 meters from Graca Hotel in Rongo town on the night she was murdered.

Police Constable Willy Okoti told trial Judge Cecilia Githua that at around 9 pm on September 3, 2018 while at Kadel police post, a good Samaritan dropped off the witness after he managed to escape from the moving vehicle.

“A white Probox approached the post. It was carrying two people. I spoke to the driver and he told me he had assisted the member of the public who did not know where Kadel police post was. He had a report to make. The reportee was shaken,” Okoti said.

The witness under protection who Okoti referred to as the reporter told him he was in the company of Sharon while at the hotel.

"The reporter did not mention which one but he said he approached them and asked them to get into a car and head over to a different hotel," Okoti said.

After being driven for about 300 meters, the vehicle was stopped. Obado’s aide alighted from the vehicle and called for two other people who were beside the road.

The two entered the car which was then driven towards Homa Bay. While in the vehicle, the reporter was threatened with death because of his involvement in investigating allegations that Obado had impregnated Sharon, the witness said.

It was at this point that the reporter jumped out of the abductor's car. He sustained injuries on his knees and palm. He was also bleeding. Sharon was left behind in the car only for her body to be found in a pool of blood in a thicket in Kodera Forest near Oyugi’s town.

“The reporter told me that he jumped out of the moving vehicle between Homa Bay and Kendu Bay and escaped. He feared for his life,” Okoti said.

The police constable told the court that following the account by the reporter, he made a report on the occurrence book and informed the OCS Kendu Bay police station to come and take the reporter for treatment.

“How was he when he was giving you this story?” State prosecutor Catherine Mwaniki asked.

“He was very much shaken. He was trembling. He feared for his life,” Okoti said.

Asked whether he conducted any investigations after the report was made at his post, Okoti said no probe was conducted but he made a report on the occurrence book (OB).

Two days later, officers from the Directorate of Criminal Investigations in Nairobi visited the post and he recorded a statement over the incident and handed it over to them.

Detectives who probed the murder of university student Sharon Otieno discovered two used condoms and an alcohol wrapper discarded in a thicket next ...
Crime
1 year ago

Okoti was the prosecution's sixth witness. He was testifying against Obado who is the first accused in the murder of Sharon and her unborn baby. Also charged are Obado’s aides - Michael Oyamo and Caspal Obiero and others not before the court.  The three are accused of committing the murder on the night of September 3, 2018, at Owade in Homa Bay county.

On Tuesday, an earlier witness adduced a series of photographs she took at the scene where Sharon had been found dead.

Crime scene investigation officer Lillian Saka adduced over 200 photographs as exhibits. In one of them, suspect Oyamo is said to have visited the gents at Graca Hotel before leaving with Sharon on the night she was murdered. Another photograph showed the point where Sharon sat with one of the witnesses under protection.

Saka arrived in Homa Bay on September 5, 2018, two days after the murder.

Saka's role in the case was to reconstruct the crime scene and do scene documentation using photographs. Crime reconstruction, according to the witness, means trying to re-enact possible events that might have happened at the scene.

The case will resume on October 4. It will proceed for another four consecutive days.