Rihanna’s cousin has been shot dead in Barbados just hours after they spent Christmas Day together.

The 29-year-old singer posted a series of photos of her and Tavon Kaiseen Alleyne together and called for an end to gun crime as she mourned his death.

Alleyne, 21, was walking through a track in the St Michael’s area of the holiday island at around 7pm on Tuesday night when he was approached by a man and shot several times.

‘RIP cousin… can’t believe it was just last night that I held you in my arms!’ the heartbroken Wild Thoughts singer wrote to her 59million Instagram followers.

‘Never thought that would be the last time I felt the warmth in your body!!! Love you always man!’

The eight-time Grammy award winner added the hashtag, ‘#endgunviolence,’ at the end of the post.

Earlier this month, Barbados Police said there had been a significant increase in gun-related crimes on the island compared to 2016. Of the 28 murders committed so far this year, 22 were gun-related, figures revealed.

According to Nation News, Alleyne’s killer, who has not been identified, shot several times before fleeing the scene.

The 21-year-old was rushed to a nearby hospital in a private vehicle but eventually succumbed to his injuries.

Rhianna later added a memorial panel to her Instagram Stories, with a black background adding his handle – @merka_95.

‘Rest up lil cuz,’ she wrote, with emojis of praying hands, a crying face and a broken heart.

The Work singer shared four shots along with the post, illustrating how close she and her cousin were.

A woman named Tanella also posted a photo of herself with Alleyne at the hospital, putting an emoji of an angel over his face. She referred to him as ‘my  brother,’ suggesting she may be another family member.

‘I never thought the day would come that I would have to bury you my love , omggg!!!’ Tanella wrote.

‘This was our first Christmas together we clean we decorate and everything!! Tavon I know you was trying to be a better person!! I loveee you soooo muchhhhhhhhh brother omg!’

Police are currently searching the island for the shooter, and have asked anyone with information to contact the District A Police Station, Crime Stoppers or the nearest police station.

Alleyne’s Instagram account featured images of the singer, including one in which he wished her a happy birthday in February.

He wrote: ‘Every day we are happy to have you in our lives. Happy Birthday cousin, we really love you. Your presence in my life is a source of joy and happiness. To my favorite cousin, may all your dreams and wishes come true. #LoveYouLoads #wishyoumanymoretocome.’

A number of the singer’s fans were quick to offer kind words amid the difficult time.

‘I’m so sorry to hear about what happened,’ one fan wrote, adding ‘my thoughts and heart are with you and your family now, I love you so so much.’

Another chimed in, ‘You have always been there for us @rihanna, so let us be there for you in return.

‘We are a family and if a member of our family is bad we all sum it up. RIP to your cousin #EndGunViolence! We are with you my love, we love you RiRi,’ adding the hashtag, ‘#StayStrongRihanna.’

The singer had previously taken to social media over the Christmas holiday, showing off her fabulous form in a red gown by designer Christopher Kane amid a winter cold.

She said, ‘When you sick af but yo friend let you wear his dress,’ in a caption on the post, later adding in her Instagram Stories, ‘1st day of Christmas $anta gave to me: the cold!!!’ 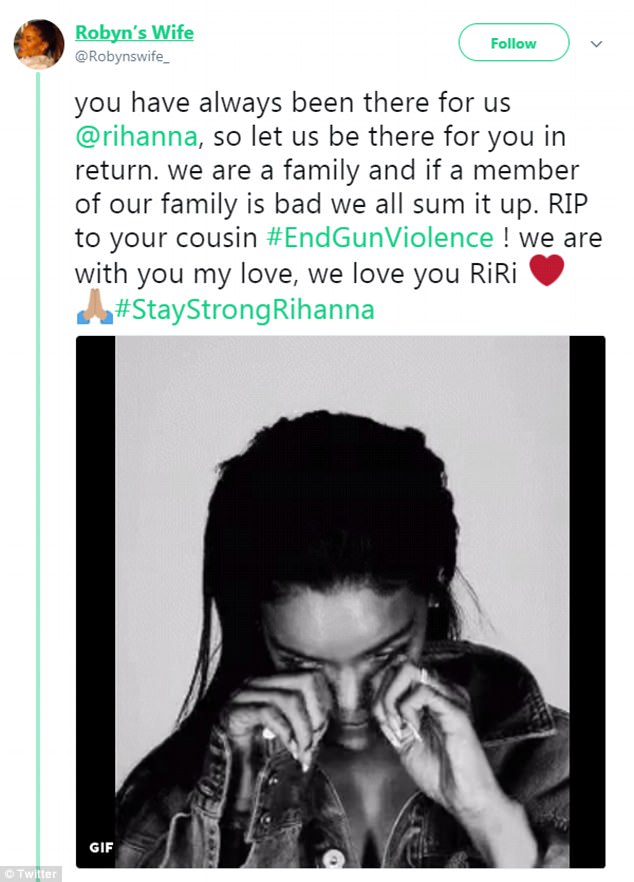 Usiseme hukuambiwa! Here are the types of baby daddies in Kenya

A needy man issa no! Three types of men you must avoid dating

Cheers Baba! Types of men who drive these car models

Mnajijua! Here are the types of women you’ll find in every Kenyan church

Salma Mbuvi to Prezzo: Here are celebs who lost their better...

‘You are still the G.O.A.T!’ Zari celebrates her late husband Ivan,...

Celebrities who have five kids and are still slaying – Photos